Examining the Strategies of a TCPA Litigator 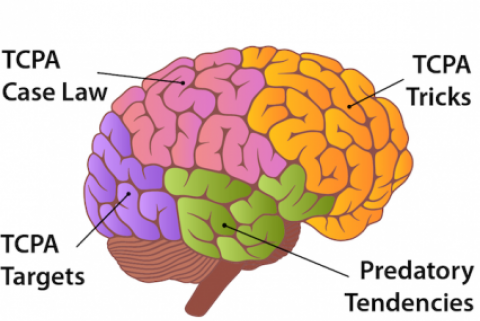 The Telephone Consumer Protection Act (TCPA) is an outdated statute, well overdue for an update. Its flaws and inconsistencies have created a cottage industry of lawsuit-mill litigators. Additionally, the TCPA provides a private right of action, which allows individuals, not just the government, to file lawsuits. Combined with uncapped statutory damages, the trend of litigation abuse of the TCPA has worsened over time and threatens companies nationwide in nearly every industry.

The most direct cost of these lawsuits is the standard penalty of up to $500 per violation (trebled up to $1,500 per willful violation). However, there can be additional damages beyond these specific monetary penalties. A TCPA lawsuit can waste a company’s time and resources, create unexpected brand damage, and mark them as a target for repeat litigation. Some cases also result in burdensome injunctions, preventing a business from certain future operations. While many of the most newsworthy TCPA lawsuits involve large, prominent companies, small-to-midsize businesses may be at even greater risk as the cost of settlements and class actions can be more devastating to them, both financially and in terms of reputation.

Because the TCPA is a strict liability statute, there is generally no forgiveness, even for good faith, honest mistakes. Litigators and professional plaintiffs exploit this, often manufacturing lawsuits through duplicitous means. This article covers some of the most frequently used techniques by litigators, the sorts of businesses that they target, and some of the most prominent and illustrative TCPA judgments and settlements.

Litigators often make use of particular tactics and deceptive practices in order to precipitate lawsuits. Among the most dangerous of these tricks are the following:

Sometimes referred to as “mixed-use” lines. Litigators will use one phone number for both business and personal use, potentially entrapping marketers who believe they are making calls to a business line when, in fact, it is a personal line for TCPA purposes.

Case Study
A Tennessee litigant who has filed over 20 TCPA lawsuits is a class-action plaintiff making a name for himself throughout the telemarketing industry due to his liberal use of the TCPA to bring class action lawsuits. He is known for publicly listing his residential phone number as a business number and has officially petitioned the FCC to define what a residential telephone line is in an effort to narrow the scope of the TCPA’s Business-to-Business (B2B) exemption.

Because TCPA fines are levied on a per violation basis, litigators can juice their numbers by intentionally allowing a company to call them multiple times before they take action against the company.

Case Study
A well-known TCPA litigant has filed over 86 TCPA lawsuits using the tactic of feigning interest in the defendant’s products or services. According to Forbes, he hasn’t even hired a lawyer to represent him in most of his lawsuits.

Bullying for an Out of Court Settlement

Litigators will ambush defendants by threatening litigation with the intention of forcing an out-of-court settlement.

By naming corporate officers and owners rather than merely the company itself, a litigator can apply additional pressure on a defendant.

Litigators and their professional plaintiff accomplices will give consent for their numbers to be called. But rather than answering when called, they will call back from a different cell phone number for which they have not given consent, and talk just enough to identify themselves before hanging up, thus baiting agents into calling back without proper consent for this other phone number.

Making Sure Their Phone Plans Charge Them Per-Call

Because it was written before such things as unlimited minutes cell phone plans, the TCPA gives standing to sue for plaintiffs who are charged per-call on calls that violate the statute. Some serial plaintiffs will exploit this provision by purposefully shopping for telecommunications plans that charge them for each call.

Case Study
One notorious serial plaintiff purchased a Voice Over Internet Protocol (VoIP) plan that charged him for each received call, long after such plans were common. As a result, this plaintiff was able to manufacture a TCPA lawsuit from calls for which he was charged a mere 1.7 cents per call.

Litigators and serial plaintiffs will purchase multiple cell phones with the intent of manufacturing claims using phone numbers they know have been reassigned from their original owner.

Case Study
A Pennsylvania plaintiff, infamous for her “shoebox full of phones,” has owned more than 35 prepaid cell phones. She said that she specifically purchased every phone in order to manufacture TCPA lawsuits. She has filed at least 11 TCPA cases in the U.S. District Court for the Western District of Pennsylvania and has sent at least 25 pre-litigation demand letters against companies over calls they made to her cell phones without her permission. The plaintiff admitted that she purchased cell phones solely in order to receive calls intended for the prior subscribers of reassigned numbers.

Litigators will often target companies with particular, perceived vulnerabilities. Among the sorts of targets for unscrupulous litigators are the following:

As demonstrated in the case studies in the guide, large companies are often targets of large TCPA lawsuits, resulting in very large payouts.

Case Study
A major cruise line placed somewhere between 2 million and 50 million calls to at least 45,000 people over the course of a year. The calls offered a free cruise in exchange for participating in a political survey. The damages in this case totaled upwards of $76 million.

Companies with a History of TCPA Lawsuits

Once a company has paid out a large settlement or judgment for TCPA violations, it can attract more litigators, like sharks drawn to blood in the water.

Case Study
From 2013 through 2018, a for-profit online university has been named in over 13 individual TCPA lawsuits including several class actions.

Litigators will take advantage of companies who have inadequate opt-in language or poorly written terms of service. Litigators will also focus their attention on companies whose essential business structure puts them at greater risk for TCPA violations, such as collections agencies.

Companies that May Not Know the TCPA Applies to Them

Many companies operate under the mistaken assumption that they are not bound to TCPA calling restrictions, including companies that focus on B2B, political organizations, schools, nonprofits, and public utilities. Another similar category of businesses at risk are those who purchase leads from or outsource calling duties to third party vendors and do not account for the possibility of vicarious liability.

Case Study
A luxury department store chain inadvertently violated TCPA laws by sending out promotional text messages to people who had opted into their “Loyalist Program,” but hadn’t specifically agreed to receive promotional or marketing text messages from the retailer. The chain denied wrongdoing and liability but chose to settle this TCPA class action lawsuit to avoid the risk of potentially staggering damages and hundreds of thousands of dollars in legal fees. The settlement totals $1.4 million.

Don’t call known litigators and serial plaintiffs
The easiest way to avoid a lawsuit is to not contact the people who are likely to sue you. TCPA litigators and professional plaintiffs find ways to infiltrate your data, and trick you or your employees into making a mistake. Your best defense is to remove these predatory individuals from your data before you can contact them.

Suppress numbers against the Do Not Call list
Telemarketers are required to suppress phone numbers on the National Do Not Call (DNC) Registry. Some states have their own local DNC lists as well, in addition to the federal list.