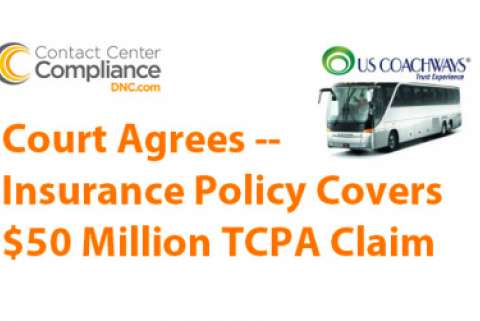 The courts have consistently ruled that a company’s insurance policy excludes settlements in TCPA lawsuits when the carefully worded policies have been challenged. That may be changing, as this recent decision demonstrates. In a March 2018 court ruling, a New York Federal judge ordered Illinois Union Insurance Company to pay the $50 million settlement in a TCPA class action lawsuit against US Coachways. How did this happen?

The original TCPA class action was filed by James Bull on behalf of a class against US Coachways in 2014. He alleged that between, December 2013 and April 2014, US Coachways sent him and class members unsolicited text messages promoting deals on bus and limousine rentals. They claimed that those messages violated the Telephone Consumer Protection Act (TCPA).

Once served with the lawsuit, US Coachways notified their insurer, Illinois Union Insurance, that they were seeking indemnification under their Miscellaneous Professional Liability policy. The insurer’s response was not unexpected. They denied coverage and refused to participate in the TCPA class action. They also refused to participate in settlement discussions, continuing to insist that the policy did not cover the alleged TCPA violations.

In November 2016, the Northern District of Illinois approved the settlement agreement for $50 million. Under the agreement, US Coachways agreed to be responsible for paying $50,000 to fund the settlement notifications to the class. Both parties agreed that the remainder of the settlement should be paid by the insurer, Illinois Union.

They key to the lawsuit against Illinois Union were the following important stipulations in the settlement agreement between US Coachways and Mr. Bull that laid the ground work to pursue insurer:

Upon approval by the court of the settlement agreement, Mr. Bull was expected to file against Illinois Union for payment under the insurance policy. Instead, the insurer struck first by filing their own lawsuit against US Coachways and the class represented by Mr. Bull.

In their lawsuit, Illinois Union sought:

Mr. Bull followed with his own lawsuit requesting a summary judgement against Illinois Union. He wanted a court decision that the insurance policy with US Coachways does cover the judgment in the underlying TCPA class action.

The court focused specifically on the wording of the insurance policy with US Coachways. Under the policy agreement Illinois Union agreed to pay, “all sums in excess of the $25,000 Retention”. It also stated that US Coachways was “legally obligated to pay all Damages and Claims Expenses . . . by reason of a Wrongful Act.”

To understand the importance of the above phrases, we first need look at how the court defined key terms from the policy in order to appreciate how they rendered a final decision:

The New York District Court concluded that the policy covers TCPA violations. Based on past rulings, the court recognized that “if the terms of a policy are ambiguous… any ambiguity must be construed in favor of the insured and against the insurer.”

The court then examined the text messages to determine if by sending them US Coachways had committed a “Wrongful Act”. They agreed that the services provided by US Coachways included advertising bus transportation to specific groups of people. The court held that the text messages offering bus transportation and travel accommodations to their recipients were “quite clearly” within US Coachways’ Professional Services as a bus charter broker.

The court also concluded that even if the TCPA violations were not covered as “charter bus broker” services, they were covered under the “Travel Agency Operations” provision. That provision covers advertisements that are “necessary or incidental to the conduct of travel agency business” as “attempted procurement for a fee or commission of travel, lodging, or guided tour accommodations.”

The court held that the insurance policy issued by Illinois Union to US Coachways does cover TCPA violations.

Illinois Union argued that, even if the unsolicited text messages were not considered a Wrongful Act, any additional amount beyond the $50,000 settlement already paid by US Coachways to notify members of the class was excluded from coverage amount due. To support their point, Illinois Union referred to the policy’s payment of damages exclusion which includes “any amount for which the Insured is not financially liable or legally obligated to pay.”

In response, the court specifically directed attention to the use of the word “or” instead of “and”, meaning that only one criteria must be met to avoid the exclusion. They concluded, based on past decisions from the New York Court of Appeals, that US Coachways remains “legally obligated to pay” despite assigning their rights to Mr. Bull and their agreement not to pursue US Coachways for payment of the $50 million settlement.

The court noted that the TCPA settlement agreement explicitly provided that Mr. Bull was not releasing US Coachways from liability. US Coachways therefore remained “legally obligated to pay” the Judgment, and it falls within the policy’s definition of covered “Damages.”

The court ruled that even though US Coachways assigned its indemnification rights to Mr. Bull who had agreed not to pursue the judgment against US Coachways, that US Coachways remained legally obligated to pay the settlement amount within the Damages definition of the policy.

The Court granted Mr. Bull’s motion for partial summary judgment, and Illinois Union must cover the settlement amount agreed to by US Coachways in the TCPA class action settlement agreement.

Prior to being caught in a TCPA class action, companies should examine their insurance policies. Ambiguous wording could work in your favor and force coverage from the insurer to pay the settlement. The decision by the court in this instance demonstrates that it is possible for a company to accept a judgement without any financial loss to the company. You can simply assign the rights to recover on a company insurance policy over to the plaintiff of your TCPA class action lawsuit.