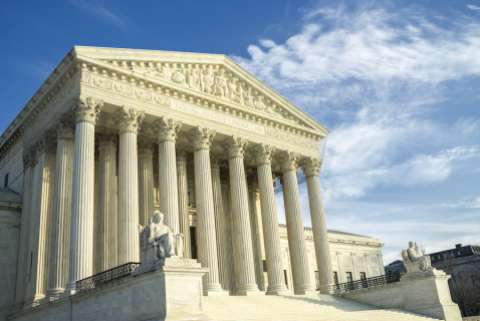 After a delay due to the COVID-19 crisis, the Supreme Court heard oral arguments on Wednesday in a case—William P. Barr, et al. v. American Association of Political Consultants, et al.—that could very well result in the Telephone Consumer Protection Act (TCPA) being ruled unconstitutional. We offer you a summary of these oral arguments based on a reading of several expert analyses.

The case centers on an exemption to the TCPA that Congress created as a part of the Bipartisan Budget Act of 2015. This provision of the 2015 law exempted calls placed to collect on a debt owed to or backed by the United States government from the restrictions on the use of automatic telephone dialing systems (ATDS) that are a central component of the TCPA. The plaintiff in this case, a group of political consultants, has argued that this is a content-based restriction that violates the First Amendment’s free speech clause and that the only remedy is to discard the TCPA in its entirety.

In an article published on The National Law Review, the law firm of Hunton Andrews Kurth LLP writes that “the questions posed by the justices during the oral argument suggest that the majority have serious concerns about the constitutionality of the government exception and are likely to strike it down.”

Over at TCPAWorld, the always knowledgeable Eric Troutman sets the scene, writing:

Justice Brett Kavanaugh fairly explicitly articulated this point, saying, “I think the government-debt exception is almost certainly content based. You don’t argue that it could satisfy strict scrutiny. Those two things make this a case about severability.” For what “severability” means in this context, we look back to another court decision from last year.

In last year’s decision in an earlier iteration of this case, American Association of Political Consultants, Inc., et al v. FCC, the Fourth Circuit ruled that the exemption was indeed in violation of the first Amendment but opted to sever the “flawed exemption” rather than ruling the entire TCPA to be constitutional. However, it is not clear that the Supreme Court will follow this example, for a number of reasons.

Artin Better writes, at TCPA Defense Force, about how multiple justices expressed skepticism at severability as the remedy:

Chief Justice Roberts commented on the appropriateness of severance as a remedy, given that when courts sever provisions, it is because the provisions themselves are illegal; not because when combined with a statute, the provision makes the statute unconstitutional as a whole. Justice Thomas described the severance remedy as “odd,” while Justice Ginsburg expressed skepticism over its applicability. Justice Sotomayor noted the “difficulty” of the issue, and the absence of anything in the record to inform how large or small of a segment of speech the exemption truly impacted.

Writing on Law Street, Kirsten Errick observed that Chief Justice Roberts “noted that the exception isn’t illegal by itself – it may only illegal as part of the broader TCPA. Because the exception is not individually illegal, it may not be severable.”

Troutman further undermines the possibility of severability by pointing to Justice Gorsuch’s observation that the government “neither sought the remedy of severence nor had standing to seek it, even if they wanted it.”

While all of these observations would point toward the likelihood that the Court will strike down the TCPA as a whole, several Justices undercut this possibility by pointing out the popularity and longevity of the statute, which was first passed in 1991. Kavanuagh explicitly said as much, telling the attorney representing the petitioners that “this is one of the more popular laws on the books because people don’t like cell phone robocalls. That seems just common sense.” Roberts also spoke to the TCPA’s popularity: “It’s an extremely popular law. Nobody wants to get robocalls on their cell phone.”

Ultimately, it seems very difficult to reliably predict how the Court will rule. As Amanda Shanor writes at SCOTUSblog, “Based on the justices’ questions, it seems that they are likely to find the law content based, but it’s less clear whether they agree on how to remedy that problem.” The government debt exemption is likely unconstitutional. But severing it from the entire statute is likely not a valid remedy. And ruling the TCPA as a whole to be unconstitutional is not desirable remedy. This does not leave any clear remedy, leaving the telemarketing industry to wait for a final decision on the landscape-altering possibility of the entire TCPA being ruled unconstitutional.

Originally, oral arguments in this case were to be heard in April, with a decision expected in June. However, due to the COVID-19 pandemic, everything was pushed back several weeks and the oral arguments were (ironically) held over the phone. This resulted in the humorous moment when someone (probably Justice Stephen Breyer) could be heard flushing a toilet during the proceedings. It also makes it unclear as to when a final decision will be reached.