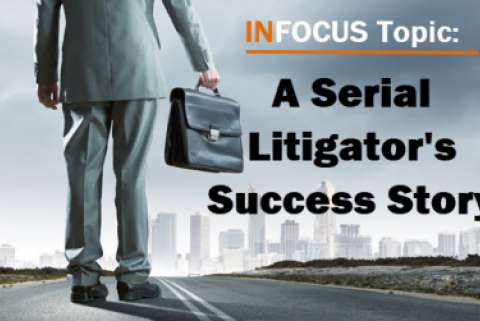 He calls himself a private attorney general—someone who files lawsuits in the public interest. But debt collection agencies have another name for him … Serial Litigator. Craig Cunningham has filed over 80 consumer protection lawsuits against companies that made the mistake of calling him on past due debts.

While most people dread receiving calls from debt collectors and credit card companies. For opportunists who know how to beat the system, it’s another day at the office. Serial litigators, like Mr. Cunningham, are well versed in consumer rights law. They know that one of these companies will violate the law, whether intentional or not, transforming a simple collection call into a profit opportunity for the recipient.

Mr. Cunningham’s lawsuit filing career began in 2005. After making some bad investments, the Texas resident was in financial ruin, owing over $100,000 in credit card debt. He needed a way out.

While searching online he discovered groups of disgruntled consumers who were using lawsuits against collection agencies to avoid paying their debts. That led him to doing further research into the federal laws that protect consumers from collection agencies. Three specific laws were of primary importance:  Fair Debt Collection Practices Act, the Fair Credit Reporting Act (FCRA) and the Telephone Consumer Protection Act (TCPA).

Armed with knowledge of the consumer protection laws, Mr. Cunningham prepared his trap. First he cancelled his alarm service with ADT Security after only two months. That triggered the expected ADT bill for a $450 termination fee, which he disputed. Then he waited. Eventually the past due fee went to a third-party collections agency that sent him a notification letter of his debt. Using the phone number from the letter, Mr. Cunningham called the collections agency and asked questions. The conversation he recorded included the following exchange:

Mr. Cunningham:  "Can you garnish my wages if I don't pay?"

Mr. Cunningham:  "Can you put a lien on my house?"

The agent’s two one-word responses to Mr. Cunningham’s questions were the triggers that sprung the trap for the Texas resident and the law was on his side. According to a federal consumer protection law, the Fair Debt Collection Practices Act (FDCPA), debt collectors are prohibited from threatening legal action that would violate state laws. In this case, garnishing wages or putting a lien on Mr. Cunningham's house would violate the Texas Debt Collection Act.

With the help of a consumer rights lawyer, he filed the first lawsuit of his newly evolving career. Two months later, he collected a check for $1,000. Even with the win, Mr. Cunningham was upset because the total settlement was for $3,500, the difference pocketed by his lawyer.

For his next lawsuit, he opted to represent himself. The case involved money he owed on a utility bill. Though he ultimately paid off the debt, he filed a lawsuit. He claimed that the collections company had threatened to send this debt to the credit bureaus and wreck his credit score. The company settled for nearly $3,500. This time he didn’t have to share the profits.  Thus began his prolific career as a serial litigator.

What Is This Serial Litigator Doing In 2017?

Earlier this year, Craig Cunningham along with Craig Moskowitz filed a petition for a rulemaking and declaratory rulings before the FCC. The petition seeks to reverse two interpretations that would eliminate the “prior expressed consent” standard for non-solicitation calls to cell phones using an autodialer or pre-recorded message. The two rulings in questions are:

Changing the rule could have a crippling effect for businesses relying on the current rule, such as debt collectors. If a declaratory ruling overturns the previous interpretations of the “prior express consent”, in favor of adopting uniform application for both cellular and residential telephone numbers, then it would require such telephone calls to be: “(i) express consent; (ii) specifically to receive autodialed and/or artificial voice/prerecorded telephone calls; (iii) at a specified telephone number; and (iv) be in writing.”

Of the formal comments submitted on the petition by the March 27, 2017 deadline, thirty opposed the petition while only three expressed support. The industry awaits a final decision from the FCC.

Craig Cunningham is just one of the thousands of devious serial litigators who may be hiding in your telemarketing data. If you don’t want to appear in their crosshairs, then the only real solution is to remove serial litigators from your calling data before you begin dialing.

The best way to do that is to work with a respected compliance provider such as Contact Center Compliance. They continually monitor court records and update their data to include serial litigators who use consumer protection law as a weapon to turn a profit.